Ten years ago, Kim McGaw spoke at a Houston-area breakfast club in front of Mary McIntire, dean of continuing studies. She had no idea that her presentation on creativity would influence Dean McIntire to ultimately hire her to teach a course she envisioned: “Thinking on Your Feet: Developing Creative Communication Skills.”

Prior to Houston, McGaw worked for a software company in Chicago after graduating from Northwestern University. She decided to quit her “corporate” job to train at ImprovOlympic, one of Chicago’s comedy powerhouses, under Del Close, whose notable students include: Stephen Colbert, Dan Akroyd, Tina Fey, Chris Farley and Bill Murray. McGaw then auditioned for and got in the conservatory at The Second City, a comedy enterprise specializing in sketch comedy and improv.

After two years at Second City, McGaw moved to Houston and taught comedy classes and produced comedy shows at The Improv in Houston, opened a theater and developed creative entertainment for special events – from parties at Beyonce’s recording studio to companywide meetings to museum openings.

Nine years later, McGaw is in her final semester teaching “Thinking on Your Feet” also known as The Rowdiest Class on Campus because she has a new role to prepare for at the Glasscock School, director of professional programs.

What are you looking forward to most in your new position as director of professional programs?
I have an opportunity to be surrounded every day by smart people who enjoy what they do and who love working at Rice. It doesn’t get much better than that.

What plans do you have in mind for Professional Development?
Thanks to my predecessor, Professional Development already has a strong lineup. I’d like to build on that by helping our instructors provide an even better experience through more active learning opportunities, both in the classroom and online. I’m new to the role, but so far my plans include ramping up our certificate program offerings and adding some phenomenal communications courses that students won’t be able to find anywhere else.

After teaching for the past nine years at the Glasscock School, what are you most excited about as you transition to a program director role?
I’m proud of our programs. Through teaching, I learned that we have the power to affect people – you never know when you’re impacting someone’s life. It’s exciting to be in a role where I can create and oversee programs that develop this city’s talent – and with online programs, even beyond.

Can you share a fun story with us from your improv days?
I parlayed my improv training into a full-time career creating “off-the-wall” entertainment for many years. One of my first clients, ExxonMobil, asked me to spice up their holiday party, so I created a Christmas tree that a comedian could hide inside and planted it in a ballroom at the Houstonian. As the tree, I crept up on unsuspecting guests as they loaded up their plates in the buffet line and queued up behind them at the bar. It took people a while to catch on – some guests even went behind “the tree” to rearrange their underwear or get the spinach out of their teeth – which made it even more entertaining when the wisecracking tree requested a scotch. Houston Business Journal caught wind of it and featured the “yakking yew” on the front page. 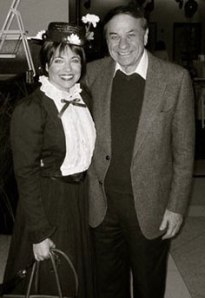 McGaw is pictured to the right at the McGovern Museum opening with National Medal of Arts recipient Richard Sherman, who wrote the musical score for “Mary Poppins” (who was portrayed in “Saving Mr. Banks”), “Chitty Chitty Bang Bang,” “The Jungle Book” and the popular Disney tune “It’s a Small World.”