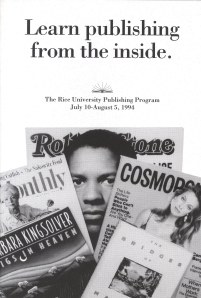 In 1978 the School of Continuing Studies launched the Rice University Publishing Program (RUPP), a four-week summer workshop focused on the commercial publishing process that continued to be held over the span of two decades. The founding directors of the RUPP include Daniel Okrent, who had been editor-in-chief of Harcourt Brace Jovanovich; William Broyles, editor of Texas Monthly and Michael R. Levy, publisher of Texas Monthly. Lecturers included Clay Felker, editor-in-chief of Esquire; Seth Hoyt, publisher of Cosmopolitan; Steven Florio, President and CEO of The New Yorker; and Karen Solem, editor-in-chief of Harper Paperbacks.

Serious professionals, those looking to change their career and college seniors and recent graduates were asked to apply. These applicants were attracted by the chance to have not only a rich and in-depth classroom learning experience, but also the opportunity to interact with “top professionals” in the field in a more casual way. Students and speakers would frequently network at evening and weekend forays to local bars. On-campus housing and meals were also available for students, providing a mini Rice University immersion experience. 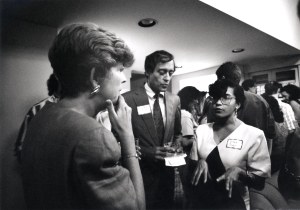 The course was structured to include two simulated publishing laboratories: “The Book Publishing Laboratory” and “The Magazine Publishing Laboratory.”  During the two-week book publishing laboratory, students assumed principle roles and enacted the process from reading manuscripts to advertising. During the last two weeks of the course, dedicated to magazine publishing, students were challenged to create and build a new magazine from the ground up. This real time assignment with deadlines, competition among groups and a tangible product provided more applicable, real-life experience. 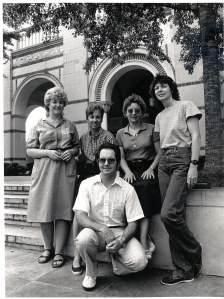 After educating hundreds of writers and editors, the final Publishing Program ran in 1998. The cost of travel, housing and entertainment for the publishing executive lecturers had skyrocketed, the career opportunities for those entering the publishing field on their own had increased and the program was no longer cost effective. The columnist who reported this lamentable news for the Austin American Statesman had herself attended the RUPP in 1980, showing how popular and pervasive the program had become over its dynamic 20 year life.

We are exceptionally grateful to the contributions Edie Carlson
provided to RUPP.

We owe a great debt to Linda Driskill whose drive and commitment got the program off the ground. It was such a great pleasure to hear from students who had met the top people in the publishing industry at Rice and went on to work for them on the east and west coasts and elsewhere in Texas. It was a tremendous learning and networking opportunity.