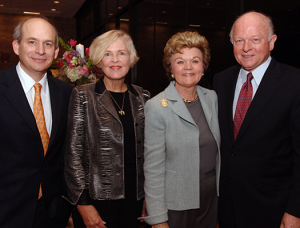 In 2005, Rice University’s School of Continuing Studies was given a significant gift by Mr. and Mrs. Melbern G. Glasscock and the Glasscock Foundation—the largest known endowment gift ever made to a university continuing education program in the United States. The Glasscocks chose to give to Rice because they wanted to give back to the community that has been enriching their lives for more than 40 years.

In their honor, the school was named after Susie Glasscock and is known as the Susanne M. Glasscock School of Continuing Studies. “It is most fitting that the school be named after a woman who is a visionary about the university’s commitment to the broader community and our school’s part in the commitment,” said Mary McIntire, dean of the School of Continuing Studies.

The naming ceremony took place at the Cohen House on Rice’s campus and marked the first time a school had been named at Rice in more than 25 years. “I am very proud to have my name associated with a school of this caliber,” Susie said. “Its mission is to offer the community educational opportunities that reflect the excellence of Rice University and…does so in a way that is very relevant to our world.”

One thought on “Flashback Friday: A Gift to Remember”