In the late 70s Houston was experiencing rapid population growth due to Texas’ economic boom, which brought many non-natives to the area. Many of the newcomers didn’t understand the Texas lore and traditions that natives revered, creating a cultural rift.

With this trend in mind, Dean Mary McIntire, then the program director of the School of Continuing Studies, and Linda Driskill, the director, developed a series of evening lectures for the School of Continuing Studies that explored the Texas experience and mystique. These courses named “Living Texas” began in 1978 and delved into all topics Texan: barbecue, ranching, country-western music, Texas heroes and families, geography, architecture, dialects and oil. Featuring well-known professors, public figures, historians and writers who were experts in their fields, the courses were wildly popular. Many corporations sent new hires to the lectures for a Texas orientation; other newcomers attended in hopes of finding a “sense of place” in their new city; natives attended to reinforce that their cultural identity was not being diluted by the recent increase in “immigrants” from other parts of the nation. 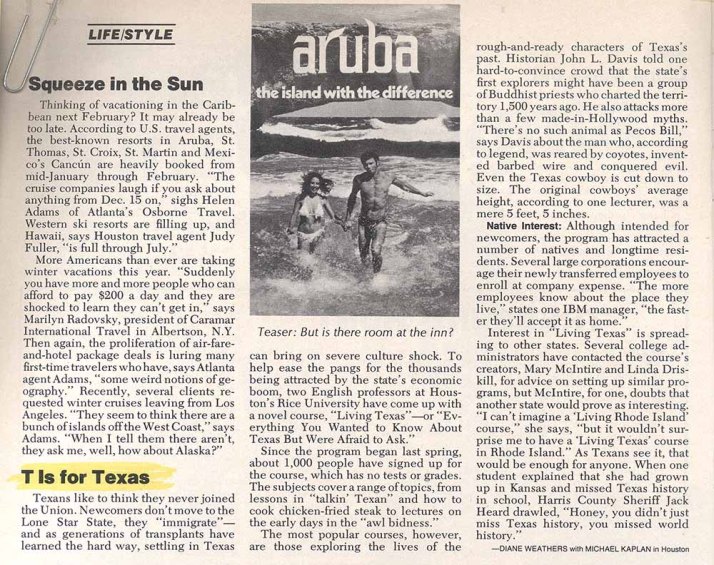 Along with high attendance, the courses received acclaim in local publications as well as Newsweek, Travel and Leisure, the New York Times and The Los Angeles Times. Neiman Marcus hosted a gala in-store party for the series. “Living Texas” was an immense success and taught a generation of new residents the nuances of the Lone Star State.