While the course title may sound fairly tame, the experience of “Thinking on Your Feet: Developing Creative Communication Skills” is anything but. Kim McGaw, a former comedienne who trained on the same stage as Tina Fey, sees it as her mission to get her participants to think and act in new ways. And as we’ve learned in the seven years she’s taught the class, that process is often uproarious. 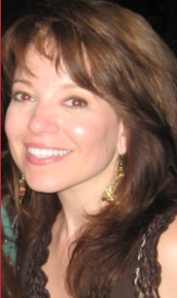 Your classes can get pretty rowdy. What goes on in there?
Let’s just say there’s a reason why my “Thinking on Your Feet” classes are held across campus from the Continuing Studies building in Duncan Hall at a time when it is mostly empty: We’re a loud bunch. You can hear laughter and applause from down the hall.

Part of that stems from the fun and supportive culture I’ve tried to create in the classroom, so that people feel more confident to take risks and do things outside their comfort zones. On the first day, I let my students know that there are no “right” or “wrong” ways to do things in my class and that it’s okay to fail. In fact, I tell them to jump in with both feet. If they fail, I encourage them to fail big time, laugh at themselves — and then get up and try again. And they do.

“Thinking on Your Feet” is 100-percent participatory and appeals to multiple learning preferences. Students play games that hone lateral thinking skills. In one session, someone might be required to come up with both a TV ad and advertising jingle in under five minutes, role play as a disruptive coworker, have a conversation entirely in questions or speak extemporaneously on a given topic.

Most of the exercises are timed and have elements of competition. People are so focused on winning, they forget to be self conscious and surprise even themselves with what they’re able to pull off in class.

Can you give an example or two of participants who were really transformed by the class experience?
One of my students was an engineer from China who initially found it difficult to participate in many of the exercises due to his extreme shyness. But he revealed something we never would have expected: he had developed a keen interest in poetry slams and set a goal of participating in one by the end of class. He came out of his shell over those eight weeks, and on the last day of class he presented a poem he had written about how much he would miss our Monday nights together. It mentioned everyone in the entire class by name. After the course, he continued to write and perform, all while continuing his job at a Fortune 100 company.

Another student, a marketing executive and Rice alumna, took my class because she felt she was in a rut at work and wanted to freshen her thinking. She also was the mother of young children and wanted to have some scheduled playtime of her own to look forward to each week. By the third week, she had gotten the majority of people to arrive early and have dinner together before class. When the course ended, she reached out to some of her classmates and organized monthly reunions where everyone continued to play the games from class and also brought their own games into the mix. Over time, each person brought new people from her network into the group. Those monthly get togethers went on for two years.

Who inspires you and why?
I’m in awe of Michael Ray, who created the revolutionary “Personal Creativity in Business” course at Stanford Graduate School of Business. I’ve modeled many of my unorthodox teaching methods on his famous classes. He has a gift for reminding people that they have the innate capacity to innovate and be creative. And even more, he has that rare ability to help people rediscover what they’re passionate about.

UPDATE: This class is offered every semester. For more information and to register, see our website.

One thought on “The Rowdiest Class on Campus”