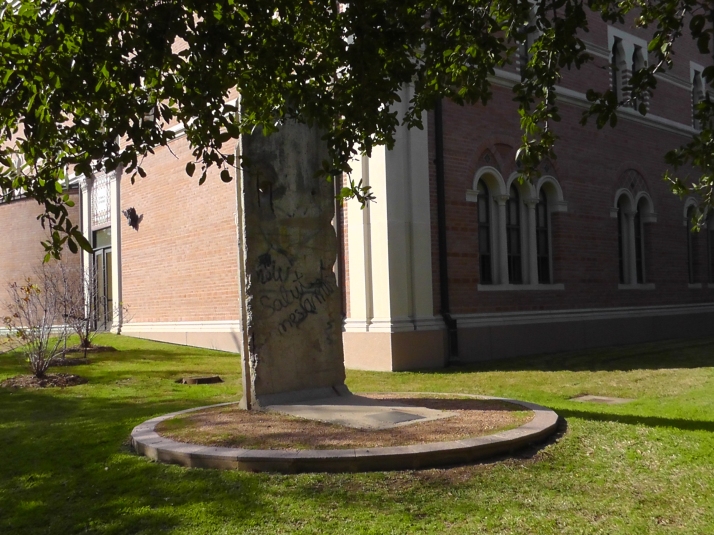 Here’s the story of how it ended up at Rice:

Browning-Ferris Industries, then a major waste-management corporation headquartered in Houston, had ties with Alba, a German waste-disposal company. Following the fall of the Berlin Wall in 1989, Alba gave the section to Browning-Ferris as a token of friendship, and a large truck and crane showed up to unload the gift, much to the surprise of Browning-Ferris. The section sat on the front lawn of Browning-Ferris for a short while before the company decided it needed a more appropriate permanent home and contacted Rice.

According to McIntire, Carl MacDowell, the assistant to President George Rupp, called her to ask if Continuing Studies would like to have the section. “Looking out at the bare space between our building and the Media Center, I immediately thought that we had the perfect home for the gift,” McIntire says. “And, given our foreign language and English as a Second Language programs, as well as personal development programs that dealt with current events, we seemed to be the logical place for a piece of recent history. So I said yes.”

McIntire wrote a detailed proposal to Browning-Ferris explaining why the Berlin Wall section would be a great addition to campus, asking for monies to move it to the open area between the two buildings and to provide a garden area for contemplation. The proposal was approved. 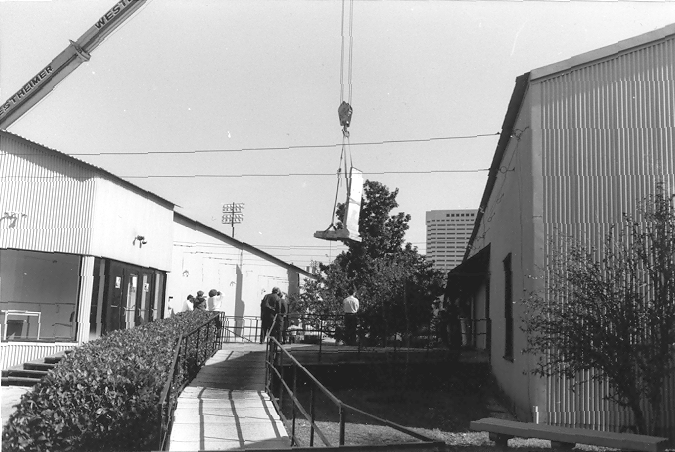 So one Saturday morning in November 1991, the crane arrived to lift the 12-foot-by-4-foot, 5,000 pound piece over the Rice Media Center and into place in the courtyard. “There was some concern that in the event of a mishap the Media Center might have a new skylight and perhaps even the beginning of a basement!” McIntire says. Because the crane operator was in the parking lot next to the Media Center, he could not see the hole that had been prepared. Men were stationed at the corners of the building and had to relay directions to the operator with hand gestures. Newspaper reporters and local television crews were on hand, so “we were all thankful it worked perfectly,” she says. A dedication ceremony was held shortly after, with dignitaries in attendance including Klaus Aurisch, Consul General of Germany for the Southwestern states. 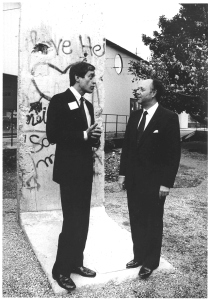 “Many people found their way to the wall,” McIntire says. “Sometimes, when I came into work on a Saturday or Sunday, as many as ten or 12 families would be in our courtyard in a period of a few hours. It was a very nice addition to our part of campus.”

In November 2000, the section was relocated to the southeast corner of Baker Hall to acknowledge former secretary of state James A. Baker III’s leadership of America’s foreign policy during the fall of the Berlin Wall and the subsequent reunification of Germany.

Bonus Fact I: The section of the Berlin Wall was extracted from the Frohnau district of West Berlin, on the border with the East German district of Oranienburg, in April 1990.

Bonus Fact II: The graffiti on the section is on the side that faced East Germany, which probably means that it was added after the wall came down. 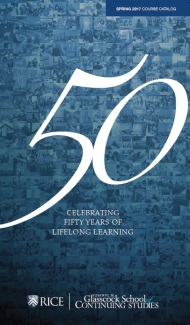