Spring personal development classes are now open for registration, and our spring catalog will be mailed out in the next couple of weeks. We hope you think the catalog is as gorgeous as we think it is. The featured image on the cover is a detail of a mural in the JP Morgan Chase Building in downtown Houston (originally called the Gulf Building). The Gulf Building was completed in 1929 and is an Art Deco beauty.

We chose that image to illustrate one of the unique courses we’re offering this spring, “A City Builds Its Identity: Houston’s Deco Era.” The photo is of one of the original murals in the Gulf Building called “Modern Houston.”

Jim Parsons, director of special projects for Greater Houston Preservation Alliance (a course co-sponsor), will teach this course, which begins March 2. Jim is the co-author of the book “Houston Deco: Modernistic Architecture of the Texas Coast” and a companion website. We asked him a few questions about Art Deco in Houston.

Tell us about the murals in the Gulf Building, particularly the one that we are using on the cover.
There are eight frescoes in the Gulf Building’s lobby painted by Vincent Maragliotti, a New York artist who also did work in the Pennsylvania state capitol and the Waldorf-Astoria Hotel. The Gulf frescoes show scenes from Texas history beginning in 1500 — but my favorite is the last one, “Modern Houston,” which supposedly depicts Houston in 1929, complete with a gaucho, flapper and a sky full of airplanes and zeppelins. Let’s just say it might not be completely accurate.

How do Houston’s Art Deco buildings compare with other cities?  Do we have a lot in comparison?
Houston has more Art Deco buildings than most people realize — the city grew a lot in the 1920s and ’30s, so there was quite a bit of construction in the area when Deco was in vogue. What’s interesting about Houston’s Art Deco is that, like the city itself, it’s spread out. There’s a concentration of big buildings downtown, but you also find dozens of smaller homes, businesses and theaters scattered throughout neighborhoods inside the Loop.

What are some of your favorite deco structures in Houston and outside of Houston?
There are so many that it’s hard to pick favorites. The Gulf Building is one of the best examples of an Art Deco skyscraper anywhere. Our City Hall is fantastic inside and out, and who doesn’t love the Alabama Theater? One of my favorite Deco buildings that is still off a lot of people’s radar is the Wilson Building at Fannin and Prairie downtown, which was designed by William Ward Watkin, one of the original architects of the Rice campus. It has seen better days, but is being restored now.

In the surrounding area, Beaumont has some amazing buildings including the Jefferson County Courthouse and the Kyle Block downtown, and the Capitan Theater in Pasadena is a great example of a late Deco movie theater.

What attracts you to the Art Deco style?
Art Deco is interesting to me because it’s evocative of an interesting time in architectural history. It started with elaborate designs in the boom of the 1920s, simplified during the Depression in the early ’30s, and then, a few years later, futuristic streamlined buildings started to show up — architects saying, “Here’s our vision of a better future.” Deco was also, in many ways, the last time traditional craftsmanship was so closely tied to architecture, which makes the level of detailing and decoration incredible. When it comes down to it, though, I like Deco for the same reason most people do: It’s beautiful. 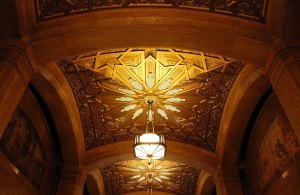